With arguably the best combination of first and second serves, the top ranking among American players for several years, a sharp wit, and a distinct appeal to many female fans, Andy Roddick is one of the most popular players in professional tennis. Roddick has only one Grand Slam singles title, the 2003 US Open, but he has made four other Grand Slam finals, one at the US Open and three at Wimbledon.

American former world No. 1 professional tennis player Andy Roddick has a net worth of $45 million dollars, as of 2021. Roddick became world No. 1 shortly after he won the title at the 2003 US Open, defeating French Open champion Juan Carlos Ferrero in the final.

Andy had an outstanding junior career; in 2000 he won the Australian Open and the US Open and reached the #1 junior ranking. After he turned pro that year, he continued to have good results, reaching a quarterfinal in Washington and winning a Challenger event. By 2001, Roddick had made the top 20, winning three ATP singles titles and reaching the US Open quarterfinal. He also went undefeated in his Davis Cup debut. 2002 was very similar, with two ATP titles, a US Open quarterfinal, continued perfection in Davis Cup, and further gains in ranking, into the top 10.

Andy’s biggest year was 2003, when he reached the #1 ranking, winning six singles titles including two Masters Series events, Montreal and Cincinnati, and the US Open. Roddick also won one of the most memorable Grand Slam matches ever, the record length (21-19 in the fifth set) Australian Open quarterfinal against Younes El Aynaoui.

Roddick had a solid 2004 as well, with four more singles titles and his first Wimbledon final, where he lost to Roger Federer. Andy helped the US Davis Cup team reach its first final since 1997, and in the Davis Cup semifinal, he recorded the fastest tennis serve ever, at 155 mph. Andy’s big serve also produced the most aces of the year, 1017. Serving records aside, 2005 was very similar, with five ATP titles and another Wimbledon final lost to Federer.

Andy took only one singles title in 2006, Cincinnati, but he reached another Grand Slam final, losing to Federer this time at the US Open. He continued to play Davis Cup, but had a very tough loss in a decisive semifinal match to Russia’s Marat Safin. If there were anything to make up for in his Davis Cup play, Roddick certainly did it in 2007, as he won all six of his matches and led the US to a 4-1 win against Russia in the final. 2007 also brought two more ATP titles and a semifinal at the Australian Open, where he lost to Roger Federer.

Probably the highlight for Roddick in 2008 was scoring wins over the top three players, Djokovic (3), Nadal (2), and, yes, Federer. Andy also won three ATP titles, but his best Grand Slam result was a US Open quarterfinal. Roddick’s serve continued to be his signature stroke, as he led the tour in service games won and break points saved. Andy’s Grand Slam results in 2009 were much better, with a best-yet, fourth-round result at Roland Garros, a semifinal at the Australian Open, and a dramatic final at Wimbledon, which he lost 16-14 in the fifth set to–you guessed it–Roger Federer.

Among Andy Roddick’s most notable career accomplishments are eight top-10 year-end rankings in a row, nine years in a row with at least one ATP title, a long list of serving superlatives, and 31 Davis Cup wins, the second most (behind John McEnroe) of all time. Off the court, his greatest accolade is the 2004 ATP Arthur Ashe Humanitarian Award, given for his work with the Andy Roddick Foundation, which has raised millions for a range of charities. Andy has since started a program offering tennis instruction and academic scholarships to disadvantaged kids in San Antonio, Texas.

This Andy Roddick Net Worth profile originated at WealthyGenius.com 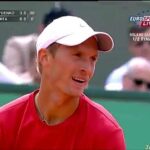 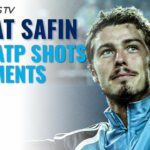