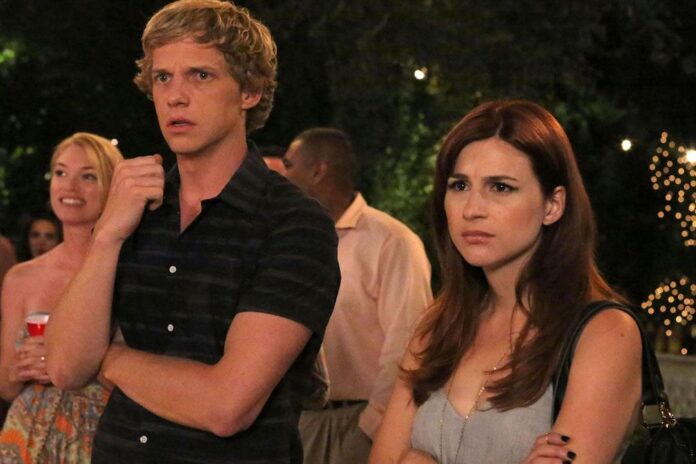 If you haven’t heard of You’re the Worst I wouldn’t blame you. The FXX comedy isn’t a ratings bonanza and it’s definitely not next-day water cooler fodder like certain shows about thrones and dragons. What it is, though, is a narcissistic little comedy that has a surprising amount of heart. Plus, its most recent season scored a 100% fresh rating on Rotten Tomatoes, which is pretty damn good. The show returns for its fourth season on September 6th, and there are plenty of reasons you should be tuning in.

At its core, You’re the Worst is a romantic comedy disguised as a show that hates romanticism. Jimmy (Chris Greere) and Gretchen (Aya Cash) are commitment-phobes who somehow find themselves in a relationship – though neither of them would call it that. If we’re being honest, neither of the leads are particularly “good” people. They’re full of acerbic wit, selfish tendencies, and a repulsion of vulnerability. But after meeting at a wedding, they’re attracted to each other and somehow willing to give the love thing a try.

The show depicts a very honest view of romantic relationships. It’s not always sunshine and rainbows – sometimes it’s the mutual acknowledgment that this may not work but let’s give it a try anyway. Even when Jimmy and Gretchen say “I love you” for the first time, Gretchen assures him that she still has one foot out the door. She’s assuaging Jimmy’s fear of attachment and likely trying to convince herself this big step isn’t quite so scary. Their relationship is full of fights, gross moments, and the push-and-pull of letting someone in but not wanting them to get too close. It’s relatable, and it’s honest.

The Depiction of Female Friendship

Much like how the show depicts romantic relationships, it also lends a frank honesty to female friendships. Gretchen and her long time BFF Lindsay (Kether Donohue) are the most realistic female friends on TV. They not only encourage each other in their, admittedly, abhorrent behavior but aren’t afraid to call each other out when things go too far. They’re both absolute messes and it’s what draws them together – and sometimes pulls them apart. But at the end of the day, there is real love between these two that rings true for many real female friendships. Their hot mess status is why they can understand one another better than anyone else. They can be slapping one another one minute and getting drunk AF the next. Get you a friend who can do both.

A Realistic Portrayal of Mental Illness

The biggest accomplishment of You’re the Worst is how it depicts mental illness. Gretchen suffers from clinical depression, and her downward spiral in the second half of season 2 and onward has been masterful. Showing the nuances of what everyday depression is really like is an anomaly on television. It was more than her being sad for a day or two. The domino effect of depression was explored in depth as we see how messy Gretchen lives due to her disease and her obsession with the lives of those whom she deems better off than her.

Jimmy’s friend and roommate Edgar (Desmin Borges) also struggles with mental illness, but for him it’s PTSD from his time spent serving in Afghanistan. While Edgar often downplays his disease – and as his friends more often than not ignore it – he is silently suffering through something numerous vets go through. Season 3 gave us an episode entirely from Edgar’s POV, showing how difficult PTSD is on a daily basis. What’s especially significant about Edgar’s struggles with mental illness is the fact that he’s a man and Latino. When was the last time you saw a man struggle with something so heavy on television? How about a person of color? Mental illness does not discriminate and You’re the Worst recognizes that by having more than just Gretchen experience something so many people go through.

The most important aspect of these depictions is the fact that the show doesn’t devote a single episode or just a few episode arc to these issues – it shows it in every episode, every character interaction and in everything these characters do. Mental illness is an everyday thing, not just something crammed into a “very special episode.” You’re the Worst shows the ebb and flow of mental illness day in and day out, showing it less as a defining trait and more as just another part of the characters.

You’re the Worst Has an Amazing Supporting Cast

One of the biggest strengths of the series is the amazing supporting cast. Lindsay and Edgar are incredible, nuanced characters and just the tip of the iceberg when it comes to the diverse characters in this world. We also encounter Lindsay’s sister Becca (Janey Varney), who is in constant competition with her sister. Lindsay and Becca’s husbands Paul (Allan McLeod) and Vernon (Todd Robert Anderson) are both so, so pathetic and so, so funny. Watching these sisters traverse their effed up marriages (Lindsay kinda, maybe, sorta stabbed Paul once) adds new layers to the show. And give it some of its funniest moments.

While these people sit around being, well, the worst; they do have jobs. Gretchen is a music PR executive and sometimes she actually does work. One of the shining supporting characters on the show is her main client, Sam (Brandon Mychal Smith). He leads a rap group and projects a rapper image, but underneath it all, he’s a closeted hipster. One of the funniest storylines on the show to date was when his fake beef with his group somehow turned into from manipulated tabloid drama to the real deal. He’s always putting Gretchen in her place and acting as an audience surrogate every time he wonders what tf her job actually is since she’s never doing it.

The Toyman Killer: It’s So Cute That Lifetime Thinks They Can Scare Us

The 10 Most Heartbreaking Celebrity Friend Break-Ups Of All Time

The Biggest Summer Blockbuster Every Year Of The 21st Century

Real Talk: Romantic Comedies Are Ruining Our Perception Of Love

The Hottest Male Athlete In Every Winter Olympic Sport

17 Celebrity Couples Who Were Just Friends Before Dating