How much was Steve Allen worth?

Who Is Steve Allen

Born in New York City the day after Christmas in 1921, Steve Allen would eventually give the world the best known late night talk show in history, The Tonight Show. He would virtually create the genre we know and love today – and make than only a footnote in a larger comedy and entertainment career.

American television personality, radio personality, musician, composer, actor, comedian and writer Steve Allen had a net worth of $18 million dollars at the time of his death, in 2000. In 1951, ‘The Tonight Show’ originated in Los Angeles as a radio program hosted by Steve Allen.

He attended Arizona State University in Phoenix – back when it was named Arizona State Teachers College – but dropped out during his sophomore year. He took a job in radio in Phoenix, Ariz., but his early career was cut short by World War II.

Allen enlisted, but never saw action overseas, returning to Phoenix after the war. After catching up and before settling down, he packed his bags and went further west, to California.

Allen quickly found work as a radio announcer (a big deal back then, when TV was still very much in its infancy). He created a popular comedy sketch show titled Smile Time and took the show from the Mutual Broadcasting System to CBS Radio, where it eventually became a nationally syndicated program.

Allen’s first television gig was as a wrestling announcer. His claim to fame was giving several pro wrestling maneuvers and holds their signature names. But the wrestling program was cancelled after only a few months.

Which was O.K., because CBS, the home of his popular radio program, was ready to launch Allen into primetime TV.

In 1950, The Steve Allen Show premiered. It received mild success and was cancelled after two years. But it helped set the stage for Allen’s eventual move into late night. In order to have a nationally broadcast show, Allen had to move from L.A. to New York, which he did.

After The Steve Allen Show was cancelled, Allen made several guest appearances on other programs and game shows before leaving CBS for NBC. There, he tinkered with an idea for a late night variety program that would match in many ways the success he found on Smile Time – funny monologues, celebrity guests, comedy sketches and interaction with a live studio audience.

NBC liked the idea and, along with creator Sylvester “Pat” Weaver, The Tonight Show was born.

The show premiered on September 27, 1954, at 11:15 a.m. with Allen as host and Gene Rayburn as announcer. Rayburn would go on to fame as the legendary host of Match Game.

During his three-year run on Tonight, Allen created much of the genre we still see today. And though the show was a success, Allen was eventually lured away by the opportunity to host a primetime program instead.

Allen hosted his Sunday night live program while still hosting Tonight three night a week. A guest host, Ernie Kovacs, hosted the other nights. But he eventually left Tonight in 1957 to concentrate on his primetime program. 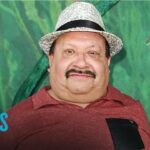