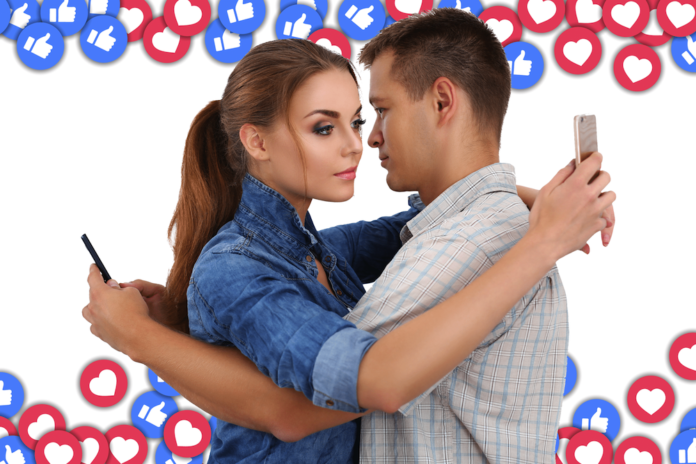 With social media only getting more and more popular, couples are always all over it. They post about their date, how much fun they had together on vacation, and even random mushy photos that, truthfully, most people don’t even want to see. And that’s why you should keep your relationship off social media. Even though all of that might sound relatively harmless from a distance, behind the photo there’s usually a completely different story.

I’m not saying all couples aren’t as happy as they appear on Instagram or Facebook but the bulk of them don’t show their true relationship. Because no relationship is perfect 24/7 and most people know that. However, acting like your relationship is incredible online can actually have more negative effects than you think… both on yourself and others. If you’re still not convinced as to why you should keep your relationship off social media, here are a few things that might make you think twice about it.

1. People Will Always try to Weigh in

2. You’ll Compare Yourself to Other Online Couples

And believe me, there are tons to compare yourself to. If you try to emulate famous Instagram couples, you’ll only highlight the flaws in your relationship. Those things are completely normal to have but when you fixate on them, it’ll ruin the relationship completely. In order to save yourself from unnecessary arguments and unhappiness, keep your relationship off social media.

SEE  20 Of The Most Underrated TV Shows

3. Your Ex Can See All Your Business

You know you still stalk your ex. We all do. It’s as if you want to make sure they’re not doing better without you. But that also means they’re cyber stalking you and, depending on your ex, that can be a really bad thing. If they struggled with jealousy problems, then adding fuel to that fire could mean a major headache. Even if things ended amicably, then you’re basically rubbing their face in your new life and if you’re thinking “good,” when you read that, then that’s an even bigger reason to keep your relationship off of social media. You’ve got bigger issues to work on than the proper lighting in your IG photo with bae.

4. You’ll Get Upset if Your Partner Doesn’t Post Something

After you’ve been posting stuff on social media often enough, you’ll actually start to wonder why you significant other isn’t posting anything. This makes you jump to all sorts of conclusions. If you’ve had conversations like, “But why don’t you want to post that picture of us? Who don’t you want to see it?” you definitely have a problem.

5. You’ll Rely on Social Media Response to Determine Your Happiness

Unless you keep your relationship off social media, you’ll end up relying on those platforms to determine your happiness. The more likes and comments you get about how cute you two are together will be what makes you happy, not the relationship itself. Which means you may end up staying with someone you’re not truly happy with just because people like the way you two look online, or you’ll be second-guessing yourself and your partner because shots of the two of you aren’t ~performing~ as well as they used to.

6. You Don’t Focus on the Relationship Itself

This is true for social media in general but it can have dire affects on your relationship if you don’t stop it. Instead of spending quality time with your lover, you’re too focused on which picture you’re going to post next. You’ll spend more time posing for pictures than actually appreciating the time you have together. And that time is essential to forge a stronger bond and build a healthy relationship.

7. It Makes Breaking Up Way Easier

Truth be told, you’re not really sure you’ll be with that person forever. Unless you’re engaged or married, a breakup could happen in the future. Imagine having to go through every picture together and delete them all. That sounds like a royal pain — probably because it is. Not only that, but also switching your relationship status to single causes a ton of drama. You’ll get people texting you being like “OMG, are you okay?!” and usually, whoever switches the status first “wins.” Better to just not have your relationship status posted online anyways.

8. Your Relationship Should be Private

There are certain parts about your relationship that should just be kept between the two of you. Nobody needs to know that you and your S.O. are snuggled up watching a good movie. Why is putting that on social media even necessary? Having private moments helps you two stay connected and it makes that time together mean more.

Instead of paying attention to how your partner is actually treating you in real life, you’ll end up measuring their affection in the forms of likes and comments and uploads. If they don’t post a photo with you, you’ll take it as a dig and feel bad about the relationship. This is true even if they’re all over you with love and affection in person. So learn to appreciate their real behavior toward you by going off the grid.

10. It’s Often Annoying to Other People

Coming from someone who sees way too many couples on social media, this is really true. You probably even get annoyed by the amount other people post of their lovers. So why do you do it? When other people are annoyed with you, it never results in anything good.

11. Even Messaging Over Social Media is Dangerous

Imagine messaging your S.O. on Facebook only for that message to accidentally be posted to your story or worse – your wall. How embarrassing would that be? Sometimes you talk about very intimate, private things. In order to avoid potential embarrassment and upset from your lover, avoid social media messaging. We all remember that story about the woman who sent nudes to her husband on a business trip… but wound up posting pics of her bare-naked body on Instagram. Seriously, too mortifying to risk it.

12. Your Relationship will be Healthier

Overall, your relationship will be better and healthier if you don’t post it on social media. Nobody needs to see all of that and you won’t have other people putting their two cents in. If you really want to have a happy relationship, avoid social media.

18 TV Reboots Nobody Wanted Or Asked For

© All Contents Owned By WealthyGenius.com
We use cookies on our website to give you the most relevant experience by remembering your preferences and repeat visits. By clicking “Accept”, you consent to the use of ALL the cookies.
Cookie settingsACCEPT
Manage consent

Any cookies that may not be particularly necessary for the website to function and is used specifically to collect user personal data via analytics, ads, other embedded contents are termed as non-necessary cookies. It is mandatory to procure user consent prior to running these cookies on your website.