How much is Russ worth?

American rapper Russ gained his popularity thanks to his Soundcloud page where he has 800,000+ followers and has been played more than 100 million times so far. He is a member of the rap group called the DIEMON Crew. As of 2021, Russ’ net worth is now $10 million dollars; that’s up 100X than just a few years ago. Russ’ net worth has been skyrocketing over recent years making more than 15 million in 2018 alone. He’s definitely a rising rap star to watch.

Russ Vitale was born on September 26th, 1992, in New Jersey. When he was only 7 years old, he began writing rap songs. Seven years later, he started making beats. At the age of 18, Russ started recording his first songs; yet it was with the hit single “What They Want” that Russ really began to find fame. The single has now been certified 2x Platinum.

In December 2011, he released his first mixtape titled Velvet, followed by another seven mixtapes during the years. Russ signed to Columbia Records in 2016. After that new headway in his career, he released the single “What They Want” and it created a sensation.

Russ got his inspiration for his music from artists like 50-Cent, Eminem, and G-Unit. In August 2016, he was accused of plagiarism in his clip titled Losin Control by Rysy, by a Polish electronic music group. They announced a lawsuit because of the similarity with their music clip The Fib.

How did Russ get rich?

Usually, Russ would make about $1 million a year, but it would be more as his songs get more and more plays. He also makes hundreds of thousands of dollars from streaming his music and then even more money from the concerts, tours, and appearances he makes.

After releasing 11 mixtapes in a two-and-a-half-year span, in 2017, he secured a multi million-dollar advance from Columbia with an unusual rare 50/50 profit split on future releases. 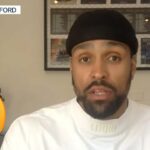