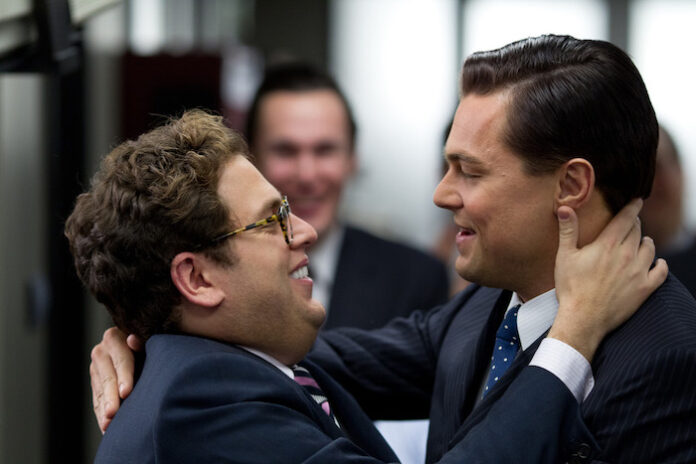 The other day we told you all about IMDb’s parental guides for movies, and we shared some of our favorite excerpts from classic kids’ movie guides. But what about movies that actually are inappropriate for children? R-rated movies with sex and violence and drugs and F-bombs left and right?

Turns out those parental guides are pretty funny too, because when you describe strange sex acts or suggestive dialogue while trying to sound professional and serious, it comes out sounding ridiculous. And believe it or not, there are still a lot of innocent things pointed out. So without further ado, here are nine popular grown-up movies and the best parental warnings for each of them. Some NSFW things will be described here, so prepare your fainting couch.

The Wolf of Wall Street

“A man is shown lying nude on his stomach while a woman straddles his bare buttocks and places a burning candle in his anus; the woman then drips hot wax on his back and he yells. His buttocks are seen.”

My favorite part of this isn’t the detailed description of the act. It’s the fact that at the end, they still feel the need to mention that his buttocks are visible, as if any parent would be like, “Candles in anuses, hot wax, whatever. Can you actually see his butt? That goes too far.”

“Many more scenes of like nature in this film.”

That’s how the sex/nudity section ends. They don’t even have time to describe it all.

“A man eats another man’s goldfish to prove a point.”

Two things are funny about this. First, the fact that their genders are specified, because man-on-woman or woman-on-woman goldfish-eating might be different. And also that it’s “to prove a point.” Well, as long as there was a good reason.

“Total obscenity count is exactly 815 obscene words and gestures. For those keeping track at home works its way out to one obscenity every 13 seconds for three hours straight.”

Mind you, this is after they outline exactly how many instances of each and every word there are. Somebody counted that.

“A talking teddy bear says to himself that he needs to have sex with a woman again.”

Ted is usually referred to as “a talking teddy bear” in every warning, which becomes endlessly amusing. Also this sentence makes me sad.

“A man accidentally swings around and punches a woman in the head causing her to fall to the ground and the man helps her up.”

As long as he displayed good manners and helped her up.

“A talking teddy bear shouts at a man and the man shouts back angrily.”

This is the most perfect sentence ever written.

“A woman chastises a man for smoking too much marijuana with a talking teddy bear.”

What if this gives kids at home ideas?

“A woman tells a group of women that she wants men’s genitals in her face.”

And then she rang her service bell and ordered her servant to arrange it for her.

Pure poetry. But get that “Oh my gosh” away from me. That’s obscene.

“The sex scene at the opening of the film is unexpected and may upset.”

I don’t even know what to say about this.

“A man cuts his hand deeply using a knife, three other men recoil as he does this and he suggests that they perform a ‘blood brother’ pact (we do not see blood and the other men do not participate).”

If you ask me, kids should see this to teach them good decision-making. Do not make blood brother pacts.

“We see a photo of a man vomiting.”

I don’t know why this amuses me so much.

“When Alan sees the tiger in the bathroom, it may be funny, but it’s also kind of shocking.”

Oh, now we’re comedy critics: “It’s kind of funny. I laughed a little. 3 out of 5 stars. But it could also scare your children so, you know, you be the judge.”

“Yes, a young man fingers, and has sex with an apple pie, his father walks in and seems him on the table with the pie under him all mushed with pieces of it everywhere and his father proceeds to say, he too has had sex with foods, but not the ‘baked goods’.”

The fact that this entry stars with the word “yes” is probably my favorite thing in the history of the world. You can almost hear the sigh behind it.

“A man talks about being the Shermanator, ‘a sophisticated sex machine sent back through time, to change the future of one woman’.”

This line was just too good not to be quoted in its entirety.

“A man at a party dresses as Marilyn Monroe to celebrate the 4th of July.”

Well, as long as he’s being patriotic about it.

“A woman suggests to her brother that he is gay when she finds sailor outfits in a bag and he admits that he is an exotic dancer; she attends the club and watches him and his friend dance and her eyes grow wide and her mouth drops open before she leaves quickly.”

“A man is shown drinking wine during the day.”

Day wine?! What are we teaching our children?! Wine should be consumed late at night when you’re sad and lonely and crying.

“Dozens of people are trapped in a burning building and die from burning and being shot at close range. A man is shot multiple times in the face until his face literally begins to shred apart. Very graphic but somehow unrealistic.”

Hey now, it’s not a movie review. Just tell us who gets shot in the face and leave it at that, okay?

Sex and the City

“As the title suggests, there is sex in this film, actual sex and sometimes just discussions about it.”

Translation: Look at the title. Don’t let your kid watch this.

“A 41-year-old woman’s pubic hair is visible while she is wearing a bathing suit. One of her friends makes several negative comments about it, including ‘Jesus, honey, wax much?’ Comical.”

First of all, obviously middle-aged pubic hair is much more inappropriate than young pubic hair. Second of all, “comical.”

“Carrie whacks Big in the head multiple times with a bouquet of flowers, although there is no blood.”

Thank goodness. Usually when I hit men in the head with flowers it’s a bloody mess.

“Ben attempts to have sex with Allison while she is pregnant, but describes (specifically) his fears about hurting the baby. She then gets on top of him and rides him and references her boobs. They then perform doggy style sex.”

I hope the person who wrote that had a lot of fun.

“Allison’s birth scene is pretty intense, as she screams and grunts loudly throughout.”

There’s also that whole “baby coming out of her vagina” thing, which they do mention, but I just like how they also feel the need to mention the grunting, just in case that’s where a parent draws the line.

How Big of a Game Are You Playing?