Before modern day MMA, there was the movie Bloodsport, and Jean Claude Van Damme was there. Before Muay Thai kickboxing came to the forefront of martial arts social consciousness in America, there was the movie Kickboxer, in which Van Damme starred once again. Fact is, like him or not, Jean Claude Van Damme movies inspired martial artists everywhere. And that’s important stuff. Reason enough, in fact, to write a biography about him.

Belgian actor, filmmaker, fight choreographer and retired martial artist Jean Claude Van Damme has a net worth of $48 million dollars, as of 2021. Van Damme is best known for his martial arts action films.

Nickname: The Muscles from Brussels

Van Damme began studying Shotokan karate at the age of 10 and received his black belt in the style in 1978 from Claude Goets. He also studied kickboxing, Muay Thai, and Tae Kwon Do. Van Damme (under the name of Jean Claude Van Vaerenbergh) posted numerous tournament victories while competing on the European karate circuit with the Belgium Karate Team, most notably against Michael J. Heming for the European Karate Association Middleweight Championship in 1980.

Beyond martial arts, Van Damme was also a bodybuilder, winning the Mr. Belgium Bodybuilding title at the age of 18. He also took up ballet at the age of 16.

Coming to the United States

Van Damme moved to the United States in 1981 to pursue an acting career. He spoke only French and Flemish at the time.

Van Damme got his first minor film roles in Breakin and Monaco Fever in 1984. He then got his most well-known early background role in No Retreat, No Surrender, with Chuck Norris in 1985. This led to his first starring role in Bloodsport in 1988. Known for doing amazing splits and 360 degree jump turning kicks in his films, Van Damme became a highly successful martial arts movie actor following the release of Bloodsport, starring in films like Cyborg, Kickboxer, Lionheart, Double Impact, Hard Target, and more.

Van Damme was born the son of Eliana and Eugène Van Vaerenbergh. His father was an accountant that owned a flower shop. Van Damme was married five times to four different women (see below). He is presently married to Gladys Portugues, whom he married in 1987, divorced in 1992, and remarried in 1999. He has three children, two with Portugues and one with Darcy LaPier. 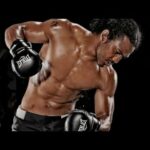 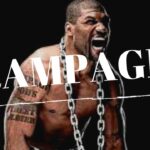