Wealthy Genius
Home From The Universe 16 Reasons You Should Be Watching The Great British Bake Off On... 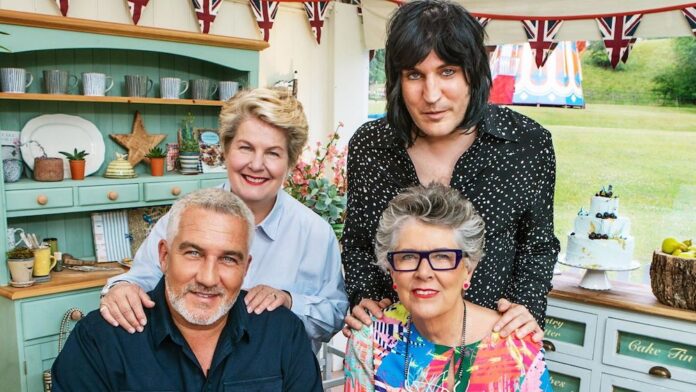 I am not being dramatic when I say that the Great British Bake Off is the best thing to happen to reality television. If you’re looking for a show that has competition, friendship, humor, charming British people, delicious baked goods and more food puns than you can imagine — then look no further. The Great British Bake Off has all of this and so much more.

Unlike most food competitions, the tone of this show is relaxing and overwhelmingly positive. In times of need, the bakers help one another — offering advice or a spare set of hands. Plus, they all seem genuinely sad when their fellow competitors are voted off. Seriously, this show will leave you with a very real case of the warm fuzzies.

Side note, there has been some recent controversy about the future of GBBO. The show originated on the BBC but is now being relocated to Channel 4 to the shock of die-hard fans everywhere. In loyalty to the BBC, Judge Mary Berry and hosts Mel Giedroc and Sue Perkins have decided they will be leaving the show. However, this doesn’t change the fact that every episode until now is complete perfection and still worth watching. Aside from my own opinions regarding this absolute tragedy, it will be interesting see how the show carries on without the three (MOST IMPORTANT) cast members. But that’s a topic for another day. So while I cannot vouch for future seasons, here are 16 reasons why you should be watching GBBO — all seven seasons.

Without hosts Mel and Sue, The Great British Bake Off would be like any other food competition. These two not only have great banter amongst themselves but with every contestant. They are basically the frosting holding the layer cake that is GBBO together. While they’re obviously great for a laugh, they also build relationships with each contestant; calming them when they’re stressed, consoling them when they face a big screw-up and cheering them on throughout their victories. Basically, if anyone has Mel and Sue’s numbers I would love to text them to go out for a drink so please let me know.

Mary Berry is everyone’s Grandma. As a judge, she is the calming counterpart to the terror that is Paul Hollywood (but more on him later). She’s kind, but not a total softie — she’ll call bakers out when they mess up her signature recipes and knows when to be firm and decisive. Also, she’s just an incredible baker. Some of the recipes she creates will completely blow your mind in their complexity and attention to detail. But most importantly, Mary is kind to the bakers, can always laugh at herself with Mel and Sue and is somehow able to put up with Paul’s constant attitude.

Well, every movie needs a villain and Paul Hollywood is just that. Whether or not someone’s creation is delicious or trash, Paul gives them this soul-penetrating stare the whole time he’s tasting it. Seriously, it can strike fear into the heart of even the strongest contestant. If you watch one episode you’ll know what I’m talking about. Or, if a contestant is trying out a daring or new recipe he’ll just say something useless like “Interesting…” or “Are you sure?” but then offer absolutely no advice.
Side note: he definitely uses fake tanner and never laughs at Mel and Sue’s hilarious jokes. And his last name is Hollywood? Bye.

4. The friendships you imagine with certain bakers

Because each baker is a self-proclaimed amateur, they’re super relatable and sympathetic as competitors. Unlike shows like Chopped, none of these bakers come in with huge egos looking to “destroy” the competition. They’re all so kind, humble and nice to one another that it really makes you feel like you could be best friends with almost any of them. You just want to comfort them with a hot cup of tea after a long day of baking pastries and receiving scrutiny from the judging eyes of Paul Hollywood.

Yet another reason Mary Berry is an absolute icon! Every episode promises a new and even more bold blazer or cardigan. The judge can rock neons, stripes, florals — you name it. The only thing more colorful and decadent than the pastries in the showstopper challenges are Mary’s pantsuits.

After every episode, you will feel the sudden inclination to abandon your life plans and open up a charming pastry shop. Despite the fact that the contestants spend almost every moment of a challenge in a complete panic, something about seeing the final product makes you think, ‘Huh, I could do that.’ Binge-watching GBBO has resulted in my testing my hand at about three loaves of bread, two cakes, and endless other goodies — some of which were even edible! But seriously, watching this show will inspire you to bake something new and delicious (from scratch, of course).

7. The complete and utter Britsh-ness of it all

This aspect of The Great British Bake Off is definitely more of a novelty for its US viewers. Aside from the obvious charming accents, every episode is chock-full of British slang, references I don’t quite understand and humor that is undeniably British. One obvious example of this is when they’re told to make “biscuits.” THOSE ARE CRACKERS, SORRY.
But regional differences aside, GBBO will make you want to move to the British countryside, drink tea all day and look upon fields of sheep while baking fresh scones.

8. The ferocity of the fan base

I guarantee you, watch one episode of this show and you’ll be hooked. If you don’t believe me, check out some of the tweets, Tumblr posts and fan pages created about The Great British Bake Off. Members of the GBBO community are still talking about the Ian/Diana Baked Alaska Disaster of 2014. Look it up. Seriously, fans of this show are super passionate and treat every episode like it’s the Super Bowl. If anything shocking happens in an episode, you can be sure that thousands of people have already made a meme about it. Basically, once you start watching this show — you’ll make thousands of new friends and join a tight-knit community.

Let’s be honest — this show is still a competition, and who doesn’t love a little bit of drama? Yes, you love the wholesomeness and positivity on this show, but a small, messed-up part of you will kind of love it when someone’s bake turns into a full-on disaster. Like that moment when a contestant realizes their oven hasn’t been on the whole time, or when their cakes fall flat. It’s like a car crash. A delicious, sticky car crash.

Some basic Great British Bake Off trivia: there are three challenges per episode — the signature bake, technical challenge, and showstopper challenge. The best is obviously the showstopper challenge. This is when contestants pull out all the stops and create bakes that are extremely intricate and visually appealing — you would not believe the lengths that these people go to in order to create a show-stopping creation.
Plus, a contestant could make a cake that can walk and talk but you know Paul Hollywood will still critique it for being dry.

11. The endless amount of food puns

If you’re a sucker for lame puns, then The Great British Bake Off will not disappoint. The only thing better than the puns are Mary and Paul’s growing weariness with each one. Seriously, how Mel and Sue are able to come up with fresh material for every episode is beyond me. But they make it look easy as pie. Ha!

SEE  17 TV Characters Whose Wardrobes We Would Like To Steal

Amongst cherries, spotted dick, soggy bottoms, and buns, there is endless material for sexual innuendo. Mel and Sue are able to create an inappropriate joke from even the most obscure baking terms — it’s truly an art. Even though things can get pretty stressful in a tent full of ten bakers working under a time crunch, Mel and Sue are always able to get a giggle from even the most stoic of contestants.

This is an obvious one. One of the greatest parts of this show is seeing all of the delicious final products. Each creation is like a work of art. Whether it’s chocolate cakes, sausage rolls, fruit tarts, savory breads — you’ll find yourself drooling over the endless combinations of carbs and sugar the contestants put together. How anyone leaves that show without going up about 4 pant sizes is completely beyond me.

Yes, I know I’ve mentioned food puns here already but there is something so hilarious about a pastry being earnestly critiqued for having a “soggy bottom.” This genuine travesty will come up pretty much every other episode. You see, when a pastry like a tart or pie is baked incorrectly, the liquid seeps into the bottom crust giving it the infamous “soggy bottom.” This is a baker’s worst nightmare. None of the contestants even chuckle at the phrase because they are all so terrified that Paul Hollywood will deem their bottoms soggy. Same.

This is a weird undercurrent that goes throughout nearly every episode. Any time a baker uses alcohol in their recipe, either Paul, Sue or Mel will make a joke about how Mary just loves getting wasted. And she never denies it! Aside from the fact that this may be slightly concerning, seeing Mary’s eyes light up at the slightest mention of booze is another signature joke throughout GBBO and we kinda love it.

16. Wholesome friendships that stand the test of time

Anyone can fake wholesome friendship and kindness for the cameras, but these people are the real deal! Seriously, part of me always wondered if it was too good to be true and if each contestant was only nice to each other because that was The Great British Bake Off’s “thing.” I was thankfully proven wrong by the internet. On Twitter especially, you can see that the contestants still remain in touch and even go out for drinks post-production. Weird, my invite must have gotten lost in the mail.

Top 20 Richest Actresses in the World

18 Of The Worst Additions To A Real Housewives Franchise