Edgar Prado was born on June 12, 1967 in Lima, Peru, one of 11 children. He began riding in Peru, recording his first win aboard Tatin in October 1983. Moving his tack to America in 1986, he started as a contract rider for trainer Manny Azpurua in Florida then moved to Maryland where he was a top rider for several years.

Peruvian-born American jockey and U.S. Racing Hall of Fame jockey in thoroughbred horse racing Edgar Prado has a net worth of $4 million dollars, as of 2021. Prado’s big break came in 1997 when he won 536 races, making him the fourth rider in history to win 500 races in one year.

Spoiler role in the Triple Crown:

Prado is credited with stopping two straight Triple Crown attempts. In 2002, he rode Sarava to victory, thwarting War Emblem’s attempt at the sweep, and in the process set a Belmont Stakes record win payoff of $142.50. Two years later aboard Nick Zito-trained Birdstone, he ralliled late to catch heavy favorite Smarty Jones in the final 1/16 to halt the Pennsylvania-bred’s hopes.

In 1999, Prado shifted base to New York to ride for John Kimmel, and the talented pilot picked up his first New York Racing Association (NYRA) riding title at the 2000 Belmont Park Fall Championship Meet. That was an indication of what was to come. After bagging the 2005 New York riding title with 206 victories, Prado was the top jockey during Belmont’s Spring/Summer Meet in 2006, and later that year, he tied for the Fall Meet title.

Prado has reigned as Saratoga’s riding champ three times. He led the nation in victories three consecutive years, 1997-99. He is the fourth rider to win 500 races in one year.

Prado will always be remembered as the regular rider of Lael Stable homebred Barbaro, who won the 2006 Kentucky Derby by a record 6 1/2 lengths to continue his undefeated streak. Unfortunately, the streak ended in the worst possible way when just 100 yards after the start of the Preakness, Barbaro broke his right hind ankle. Prado earned accolades for pulling him up immediately, dismounting, and attending to him. He also visited Barbaro at the New Bolton Center, where the valiant dark bay ultimately succumbed to laminitis in January of 2007.

Barbaro stole all the headlines in 2006, but Edgar Prado did go on to have one of his best years ever as a jockey, a year when he lost his mother to breast cancer just before the Kentucky Derby. After winning Belmont’s 2006 spring/summer meet, he won his third Saratoga riding title, taking 46 races in 216 mounts. He and Eibar Coa tied for the Belmont fall meet title. Teaming with Michael Matz, trainer of Barbaro, he won the Breeders’ Cup Distaff aboard Round Pond, and was named the Eclipse Award winner for Outstanding Jockey of 2006.

Along with the 2006 Eclipse Award and Mike Venezia Award, he was named the 54th winner of the George Woolf Memorial Award in 2003. He won the ESPY Award in 2006, as well as the Mike Venezia Memorial Award for “extraordinary sportsmanship and citizenship.” In addition, the New York Turf Writers Association has presented him with two Fourstardave Awards for Special Achievement at Saratoga.

Prado is married to Liliana and they have three children, Patricia, Edgar Jr., and Luis. His father was a trainer in Peru, his brother Jorge was also a jockey and is currently a trainer in Maryland, and his brother Anibal is a jockey at Philadelphia Park.

This Edgar Prado Net Worth profile was originally published on the WealthyGenius.com website. Any posting of copyrighted material is expressly prohibited. 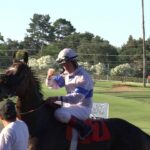 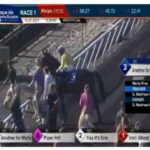