“I got a skateboard for my 10th birthday from my mom. It was fun, and I jus kept riding it and having fun. And over a few years s*** just happened. I’m jus influenced my firneds and music, my family is rad too.”

“I fancy brers and fries the most with a coke.”

Duffel says, “I aint trying to toot my own horn. I jus wanna roll and get my kicks.”

“I’m jus siked to ride a skateboard and travel with my friends.”

This Corey Duffel Net Worth profile originated at WealthyGenius.com 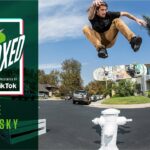