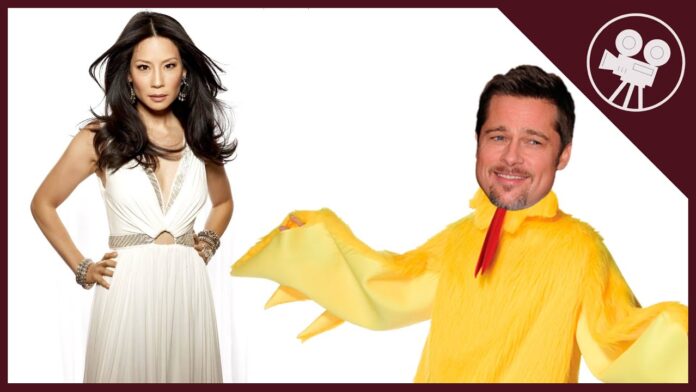 It is hard to believe that the likes of Beyoncé and Kanye West weren’t always some of the most renowned people in the world. Yup, that’s right. Not every famous person in the world was born in the spotlight. Unlike Michael Jackson and Justin Timberlake, who’ve both been working since what seems like birth – other celebrities had to make due doing normal jobs like you and me. Some celebrity jobs before they were famous were as typical as fast food and some were as weird as a panty picker-upper. See the rest of the celebrity jobs they had before they were famous.

In case you’re wondering, yes a lot of celebs took to sweeping before their big breaks. We all know Ashton Kutcher was a model before That ’70s Show made him a part of our lives forever, but his past also comes with manual labor. He once worked at a General Mills factory sweeping up cereal that’d failed to make it into the boxes.

Today Kanye West sells clothing for insane prices. Maybe that’s because he worked in retail years ago at Gap and is holding a grudge. Seriously, retail is one of the hardest gigs one can ever have and survive. All those customer interactions. UGH!

14. Jim Carrey was a Janitor

If there was ever someone who could bring comedy to being a janitor, it’d be Jim Carrey. The man who owned the ’90s with roles in Ace Ventura and The Mask didn’t always have hit movies under his belt. Instead, he had a mop bucket when he was your typical janitor.

People like to think Justin Hartley just got started on This Is Us. Wrong! Soap opera fans know he was on Passions YEARS ago. Then after that, he moved onto Smallville. Before all of those roles though Justin mowed lawns with his brother. Not too bad, but we’re happy he’s on the show that makes us cry way too freaking much now.

Known best for being Han Solo in the Star Wars realm, Harrison Ford is still doing his thing in movies like Blade Runner alongside the always dreamy Ryan Gosling. Before all of that though, Ford was using his hands and doing hard work as a carpenter. Huh, we would have never guessed that.

Okay, so does a job count if it lasted only as long as a weekend? We’re going to say yes, but it probably wouldn’t be something you could put on your resume. That means Fetty Wap can’t use his two days of work at FedEx when applying for his next gig. We think he’ll be doing music for awhile, but you never know.

10. Lady Gaga was a burlesque dancer

Out of all the “before they were famous jobs,” this one seems pretty fitting. Lady Gaga has never been shy about her body and sexuality so we’re not surprised that she was a burlesque dancer back in the day. Are you?

We all know very well what Channing Tatum did before he was well, Channing motherf*cking Tatum. His past as a stripper isn’t something he hides at all. In fact, he went and wrote a movie based around it. You may have heard of it? Magic Mike and the even better sequel, Magic Mike 2?

Okay, now this one does surprise us a little just because when we first met Gabourey Sidibe she was still pretty young. When did she have time to be a phone sex operator? Well, she did, and she was. Seems like some celebs have some pretty dirty pasts, right?

While she spent some time cleaning toilets with a house cleaning company, she probably liked her other pre-fame gig a whole lot more. With her dad being a heartthrob of the ’90s back in the day, he got a lot of panties and bras thrown his way during concerts. For $10, Miley would go around the venue at the end of the night and pick them up for Billy Ray Cyrus. We’re sure she now gets her fair share of undergarments thrown her way. Maybe her dad picks them up for her now!

Before she sang her heart out on Glee, she was serving up a lot of wings as a Hooters girl. A great job if you like men ogling you day in and day out, but it just wasn’t for her. We don’t blame her! We’re happy she doesn’t have to rock the short, orange shorts anymore.

How fitting that her name has the “Mc” do it because our girl Rachel McAdams used to be all about that Big Mac life working at McDonald’s. Hey, people have to get a start somewhere. She admitted to Glamour that she wasn’t the best, “I was not a great employee, I broke the orange juice machine one day.”

Many famous faces spent time working in the food industry. Rachel McAdams isn’t alone. In fact, Nicki Minaj is one of those celebs, as well. She didn’t work a drive-thru, though, and instead, she was serving up cheddar biscuits in Red Lobster before she was the badass rapper we all know and love today.

No Doubt started when Gwen Stefani was still just a teen, but that didn’t mean she could just leave normalcy behind just yet. Before the band had their big break, Gwen was neck deep in ice cream at Dairy Queen. Then No Doubt became one of the biggest bands ever, and she didn’t have to work there ever again. Ever think she goes back for a dipped cone?

There has been a lot of success to come out of American Idol, but Jennifer Hudson is in a lane all her own. Why? She didn’t even win and still managed to become a household name with her musical talents. Oh yeah, she’s also the only winner of the reality show to ever win an Oscar, too. Of course, before all of that, she was just hoping to make it out of her job at Burger King.

2. Brad Pitt Dressed as a Chicken

Some people work in food. Some are the food. When we heard that Brad Pitt once dressed like a chicken outside of a fast food restaurant we were a little peeved. How could you cover up that face? Little did they know that the dude in the chicken suit would one day be considered one of the sexiest men alive…

1. Beyoncé Swept Hair at a Salon

When your mom runs a salon, you’re going to have to sweep some hair. Yup, even the almighty Beyoncé had to hands a little dirty back in the day sweeping up at Tina Knowles‘s hair salon. She opened up about her former job in her HBO documentary Life is But a Dream. Of course, she’s come a long way since then. She’s Queen Bey with her Beyhive, sold out shows around the world, clothing lines, hit songs, and well… what hasn’t she got?

18 Times Rihanna Changed The Fashion Game With Her Bold Looks

How To Exercise While Watching TV

32 Terrible Movie Remakes That Are Crimes Against Film

18 Weirdest Celebrity Rumors Of All Time