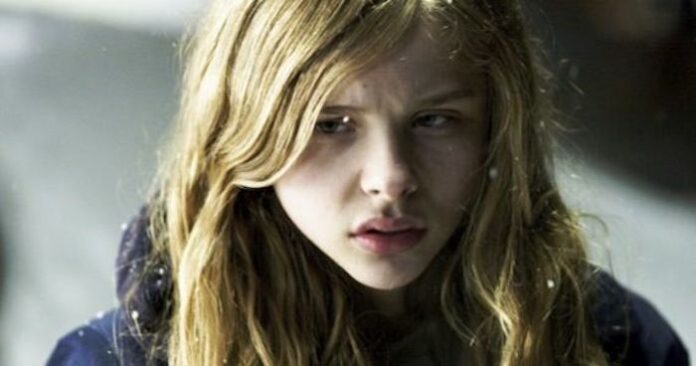 File that title under Things You Never Thought You’d Hear A Starlet Say, right? This weekend I went to New York Comic-Con and had the pleasure of seeing the cast and crew of the highly anticipated horror remake Carrie. (I say “highly anticipated” because I had to get to the theater at 1:30 for the 3:45 event. But I got to see several other exciting panels while waiting, so it was a win-win.)

I can confirm that Chloe Moretz is as pretty, giggly, and smart in-person as you imagined. Although Julianne Moore plays her overbearing mother in the movie—who verbally abuses her daughter and stabs her at one point—the two were constantly whispering and laughing together between questions. Joining them were director Kimberly Peirce and producer Kevin Misher, who discussed the pressures of adapting Stephen King’s famous novel—which is already an iconic movie—and if they felt obligated to reimagine it within the bullying stories that have shaped our current high school landscape.

One of the fans asked if Chloe intentionally chooses these dark roles, because there does seem to be a trend of her playing a vampire, an angry masked hero, and soon a zombie. But Chloe said it’s nowhere near as calculated as that. “I’m a happy girl,” she insisted. “I have a really good family; my mom loves me, I have a really supportive family. I like playing characters that aren’t me and that actually challenge me, because it’s not as fun to just play yourself, you already do. A lot of my movies do fall into the darker genre, because it’s things that I’m more gravitated to that I like doing more, that challenge me and make me happy. I don’t exactly look for a genre to go after.” So ironically, it’s playing characters that are this fucked-up that make her even happier.” (We’re glad to see that we were right about her mom not being a momager!)

The way she speaks, you forget that Chloe is only 15! “It’s interesting,” she mused. “I was talking to Kim around the end of the movie and we were talking about the transformation that’s happened from the moment I auditioned for the role. There’s a moment during filming… During the audition process, she was like, ‘Let’s see if you can play older.’ In the middle of the movie, Kim looked at me and went, ‘I need you to be younger.’”

As the audience laughed, Chloe imitated her own shock and frustration: “‘The whole problem is that I wasn’t old enough, what do you mean?’ I went from the actress who had never been given the chance to fully go there, then I worked with people like Kim and Julianne. Nothing can prepare you for that.”

One of the best questions from the audience was how much Peirce was influenced by the inspiring and devastating stories of bullying today. Moore explained that they “didn’t set out to make a polemic,” but Peirce did acknowledge how this movie is set in a new atmosphere: “Like I said, I’m very character- and story-driven. So I fell in love with Carrie—who she was, what she was going through, all these relationships—and really wanted to bring that to life. The idea of bullying… Certainly there is a wider awareness of bullying than there was in the time when [Brian] De Palma made his movie and when Stephen King wrote his book.

“I certainly think in some of the scenes there’s an awareness by the teachers and the school that these phenomena happen and they need to do something about it,” Peirce added. “I can’t give away any plot details, but we have a whole fun, dangerous throughline of what one of the girls does with social media. That’s just a representation of the modern world, what people are going through. What’s been happening in our culture only makes the story more relevant.”

15 Actors Who Shared A Role With Their Twin

Top 10 Heavyweight Boxers Of All Time

18 Disney Theories That Will Keep You Up At Night