Wealthy Genius
Home From The Universe Book Adaptations: Actors Who Looked Nothing Like Their Characters 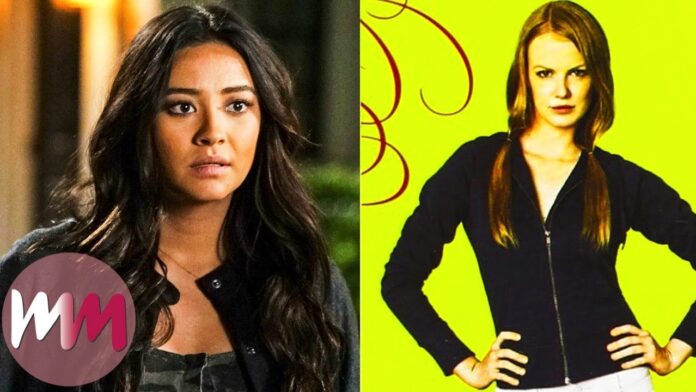 Book adaptations can be frustrating. We all know the strange mix of emotions that come along whenever you hear that one of your favorite books is becoming a TV show or movie. While you are obvs excited to see these stories come to life on screen, you can’t help but worry about all the little details that could get lost in translation or, even worse, get cut out completely (still not over Peeves getting the axe in Harry Potter, tbh). When so many edits are made and the piece needs to be boiled down to two hours of screen time, it’s hard for a movie or TV adaptation to stay true to the original plot. But what really irks me is when the directors cast actors who look absolutely nothing like the character descriptions in the books.

Case in point? Take Jennifer Lawrence who played Katniss Everdeen in The Hunger Games. In the books, Katniss is described as olive-skinned with long, dark brown hair and gray eyes. She’s also supposed to be very small because her family lived in poverty and they were malnourished. However, Jennifer is fair-skinned, blue-eyed, and in perfect shape (a simple dye job can’t cover up such drastic differences).

Now don’t get me wrong, Jennifer is one of the most talented actresses out there and she played the role pretty well. But still, all we want are more accurate on-screen portrayals of these well-known characters. Is that too much to ask?

See which actors and actresses have played book characters who look completely unalike:

Guys, a thin supermodel was cast to play a curvy and intelligent character who struggles with her insecurities. Perhaps Cara did impress everyone with her performance, but would it have hurt for them to go for a talented actress who doesn’t look like a beauty queen?

2. Liam Hemsworth as Gale in The Hunger Games

In the book, he was described as over six feet tall with olive skin, very dark hair, and gray eyes. While Liam definitely had the height, he was actually pale and blue-eyed. Definitely not the Gale we imagined.

3. Jennifer Lawrence as Katniss in The Hunger Games

As I said, Katniss, like Gale, is supposed to have darker skin and gray eyes (they could actually pass for family). Also, she’s a 16-year-old who happens to be quite tiny. But of course, the director went with a fair-skinned, fit, and blue-eyed actress who’s certainly not a teen (but that’s kind of typical in Hollywood, right?).

4. Alexandra Daddario as Annabeth in Percy Jackson & the Olympians: The Lightning Thief

According to the books, Annabeth is supposed to have a deep tan and blonde curls. But Alexandra, who was cast to play the role, has super fair skin and is a brunette. Her appearance did change slightly in the next film when she went blonde, so we’ll give them some credit for making an effort.

5. Imelda Staunton as Professor Umbridge in Harry Potter and the Order of the Phoenix

Okay so to be fair, we imagine it’s almost impossible to find a short and toad-like actress with bulging eyes and a wide mouth. Even though Imelda certainly didn’t come off as any of those things, she definitely did the character justice.

6. Mandy Moore as Jamie Sullivan in A Walk to Remember

Jamie is supposed to have “soft blue eyes” and “honey blonde hair.” Now, as much as I adored this movie adaptation (and obviously Mandy is the bomb in every role she takes), it’s confusing that the actress (who’s naturally blonde) had to dye her hair brown for this role. She also has hazel eyes, rather than blue.

7. Keira Knightley as Elizabeth Bennet in Pride and Prejudice

According to how the other characters perceive her in the novel, Elizabeth Bennet, the book character, isn’t extremely attractive. Her image is not perfectly symmetrical, she’s average-looking, and she’s rather plain. However, Kiera (who happens to be freaking stunning) is basically the opposite of all those things.

8. Teresa Palmer as Gabby in The Choice

In the novel, Gabby has red hair, freckles, and fair skin. But Teresa, who played Gabby, is actually petite, tan, and blonde. Not seeing much of a resemblance between her and the actual character here.

9. Iwan Rheon as Ramsay Bolton on Game of Thrones

Ramsay is originally described as very unattractive. He has blotchy skin, a broad nose, a small mouth and long dark hair. But Iwan is rather handsome on the show. He looks absolutely nothing like this.

Fans of the book series were furious when they found out about Tom being cast for the role — and understandably so. The original character is an ex-military officer who’s six-foot-five with over 200 pounds and a 50-inch chest. Tom is an ant by comparison. And his stellar acting just can’t cover up the fact that he looks nothing like the actual character.

According to the books, Emily is supposed to have strawberry blonde hair and hazel/green eyes. She’s also supposed to have a more muscular form. Shay, on the other hand, is slim with hazel eyes and dark brown hair.

The author described Aria as having shoulder length blue-black hair and icy blue eyes. Also, she’s supposed to be tall and thin like a ballet dancer. On the show, Lucy is actually the shortest of the group with long black hair and green eyes.

13. Shailene Woodley as Tris Prior in Divergent

In the books, Tris has a long and narrow face with wide blue eyes, blonde hair and a long, thin nose. But Shailene literally doesn’t fit this description at all. She has hazel eyes, brown hair, and an oval-shaped face.

14. Lily Collins as Clary Fray in The Mortal Instruments

The author described Clary as having carrot-colored red hair, green eyes, fair skin, and a lot of freckles on her face. Lily, however, has dark red hair, hazel eyes, and no freckles. Did they even read her character description? When Clary came to life in Shadowhunters, the TV show, Kat McNamara looked exactly as we imagined when Cassandra Clare wrote the books — which just made Lily’s depiction all the more laughable.

15. Jamie Campbell Bower as Jace Herondale in The Mortal Instruments

In the books, Jace has curly blond hair and long eyelashes. He’s also slightly muscular and is almost six feet tall. Unfortunately, Jace comes off as a lanky fellow with stringy blonde hair in the movie adaptation. And we’re just not buying it. Again, Dominic Sherwood‘s portrayal of Jace in Shadowhunters blew us away in comparison.

In the novel, she’s described as the “frog among swans.” She’s a bit overweight, she has pale skin, and she has pimples on her neck. Seeing that disheveled version of Chloe on screen was a nice try, but she just wasn’t what readers envisioned.

In the book series, Jenny actually has curly brown hair and “incredibly huge” boobs that she’s insecure about. To this day we can’t understand how Taylor, who has a much smaller chest and blonde hair, managed to get that role.

The author of the series once told People magazine that she wasn’t a big fan of Vanessa, and we can totally understand why.

“I think Vanessa is one character they ruined. In the book, she’s kick-ass and has a shaved head and wears lots of black. I think a lot of the readers who don’t usually read teen fiction identify with Vanessa,” she said.

19. Emma Stone as Skeeter in The Help

In the book, Skeeter is described as tall and lanky with a crooked nose and frizzy red hair, which is enough to suggest that she isn’t conventionally attractive. But in the movie, Emma is stunning and not very tall. Those red curls were a pretty weak attempt to downplay her beauty.

17 Famous Singers Who Nearly Lost Their Voice For Good

16 Fashionable TV Characters To Inspire Your Next #OOTD