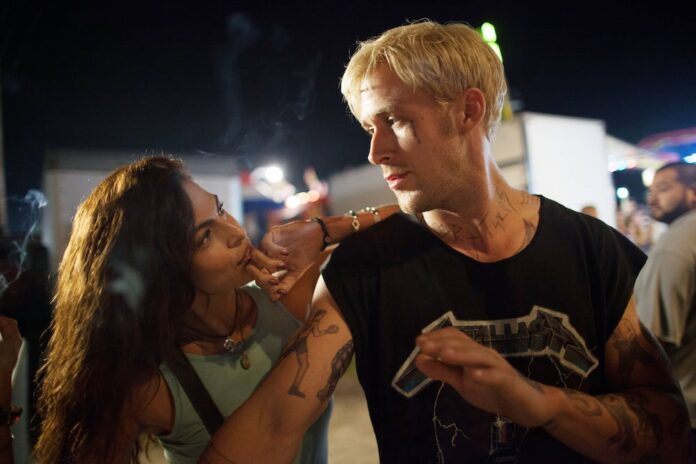 There are lots of couples who we love. Some of them are on TV, others are from movies and then there are those real-life couples that just seem so perfect. There are also those couples who are together on screen and off that we are completely in love with.

There’s something romantic about actors and actresses meeting on movie sets, realizing that they have undeniable chemistry and continuing their relationships off-screen. We really shouldn’t be surprised that so many celebs hook up given that they can spend 18 hours a day shooting together, but it still makes for a great love story — especially when the relationships lasts.

Sadly, not all co-star couples end up staying together. Sometimes, the relationships fizzle after the press tour and the stars move on to their separate projects. But, not all on-screen/off-screen couples end up that way. There are those happy times where the celebs stay together…and sometimes end up getting married and having kids. Have a look at 16 cute co-star couples who we L-O-V-E.

Ginnifer Goodwin & Josh Dallas (Once Upon A Time)

How perfect is the idea of a couple of co-stars finding romance on a show called Once Upon A Time? It’s the stuff that fairy tales are basically made of. Well, it actually did happen in the real world with Ginnifer Goodwin and Josh Dallas. The co-stars acted together on the ABC fantasy show and romance blossomed. They might both be leaving the TV series, but their relationship continues on. They’re married and they have two kids together.

There are many things to be thankful for about Pitch Perfect. Catchy songs, Anna Kendrick and Rebel Wilson are some of them, but so is Anna Camp and Skylar Astin‘s relationship. It might not have been the first set of co-stars you would have thought would end up together in real life, but Aubrey and Jesse are very sweet together IRL. In fact, they even got married after a few years of dating. Yes, some of their co-stars were invited to the wedding. Can you say “aca-awesome”?

It’s a Batman romance…well, sort of. Benjamin McKenzie, aka Ryan Atwood on The O.C., now stars in Gotham, a show that’s basically a prequel to Batman and looks at the life of Jim Gordon before Batman dons his cape and helps fight crime in the city. Morena Baccarin plays Leslie Thompkins on the show, and she and Ryan ended up forming a relationship. The duo even have a baby boy together. Morena might not be Marissa Cooper, but we still love this pairing.

It seems that the people who star on a TV show as KGB spies in an arranged marriage pretending to live a normal life in the suburbs can end up together. That’s at least the case with co-stars Keri Russell and Matthew Rhys who play Elizabeth and Phillip Jennings, respectively, in the FX Series The Americans. They have kept their relationship out of the spotlight, but we still love everything we hear about it. They even had a baby together in 2017.

It’s not just scripted TV shows that have #couplegoals moments. Who would have thought that The Voice would produce Gwake? That’s the work-in-progress-name for Gwen Stefani and Blake Shelton. No offense to the contestants and other celebrity judges on the show, but Gwen and Blake’s relationship has almost eclipsed everything else. It’s because they’re a twosome who you don’t think would work at all, but when you see them, you realize how cute they are. Plus, they sing together, you guys.

Dancing with the Stars has produced a lot of relationships in its 25 seasons. Most of the couples usually fizzle out after that season’s Mirrorball Trophy is handed out and the constant dance practices end. One relationship that has made it through a few seasons of DWTS is the one between pro dancers Maks Chmerkovskiy and Peta Murgatroyd. The couple had an adorable son together, Shai Aleksander, and they got married this summer. They’re also still together after competing for the top spot on the show. The couple who competes against each other in glittery spandex stays together, right?

Maks Chmerkovskiy isn’t the only one who has found love on the dance floor. His younger brother Val Chmerkovskiy felt a connection with Dancing with the Stars troupe member Jenna Johnson. Unlike Maks and Peta, Val and Jenna haven’t walked down the aisle together (yet), but the pair have been dating on and off for two years. If you didn’t know about the relationship, it’s because they have kept it fairly quiet — up until recently when Val’s been declaring his love on IG all the time. the duo did dance together in a trio dance with Val’s partner Victoria Arlen on a recent episode of DWTS, which is the reality TV equivalent of going FBO.

~*Spoiler alert:*~ If you’re up to date with all of your Game of Thrones episodes, you will know that Jon Snow and Ygritte found love North of the Wall…and the actors who played them, Kit Harington and Rose Leslie fell in love off-screen, too. The private couple have mostly kept their relationship out of the spotlight, but they have posed on red carpets together. In September 2017, it was revealed the co-star couple was engaged after making the announcement in the newspaper. Awwwww.

You might remember that Sophia Bush got together with her One Tree Hill co-star Chad Michael Murray. The pair ended up tying the knot, but the relationship never lasted. It wasn’t all bad news because Sophia went on to start a relationship with her Chicago PD co-star Jesse Lee Stoffer. The pair have been on and off, but it looks like the relationship is back on and the moment. Here’s hoping that it stays that way.

We’ve had professional dancers who got together on TV, but we also have actors who got together after a dancing movie. For the latter, see Jenna Dewan and Channing Tatum. The couple starred in 2006’s Step Up. Things heated up on the dance floor in the movie when bad boy Tyler Gage (Channing) fell for ballet student Nora Clark (Jenna). We suppose something similar happened off-screen. Over 10 years later, the duo have a daughter, Everly Tatum, and are still known to dance and sing together.

There are lots of us who hoped that Alexis Bledel would end up with any one of her boyfriends from when she played Rory Gilmore on Gilmore Girls. That might not have happened, but she did end up getting together with another co-star, Vincent Kartheiser. The duo appeared together on the fifth season of Mad Men. Apparently, sparks flew, but they kept their relationship quiet until after the show wrapped. They supposedly wed in a super-private ceremony and now have a sweet son together.

Robert Pattinson and Kristen Stewart weren’t the only couple who got together while filming a vampire project. Anna Paquin and Stephen Moyer also hooked up. The pair found love while working together on HBO’s True Blood. The difference between them and Robsten is that Anna and Stephen are still going strong today. The pair got married back in 2010 and have adorable twins, Charlie and Poppy. Their story is proof that relationships with vampires can work. Well, you know what we mean.

Ryan Gosling & Eva Mendes (The Place Beyond The Pines)

If you watched the 2012 film The Place Beyond the Pines, you will remember that it was a great movie if you wanted to see a tatted up Ryan Gosling with bleach blond hair. It wasn’t exactly the best movie to watch for #relationshipgoals. However, there was clearly something there because Ryan and co-star Eva Mendes ended up seeing each other after the movie. They’ve been together for about five years. The private couple has secretly gotten married and they have two daughters together. We might not get to see the kids or even the couple together on the red carpet, but their low-key relationship makes them even more adorable.

A show entitled Revenge might not seem like the place where a love story would emerge from, but it did in the case of Emily VanCamp and Josh Bowman. As Emily Thorne and Daniel Grayson on the ABC drama, their relationship was, erm, strained… to put it nicely. However, there seems to be much less drama IRL. The pair has been dating since 2012 and they’re now engaged.

There are lots of things to obsess over relating to Stranger Things and that includes the possible-but-pretty-much-confirmed co-star relationship between Charlie Heaton and Natalia Dyer, aka Jonathan and Nancy in the Netflix show. There are running tallies of the times they’ve sparked romance rumors. They’ve also been caught holding hands and basically sucking face, so it seems that this one is on. And we’re all here for it.

Riverdale is basically one of the hottest shows of the moment so it only seems right that The CW program has produced a buzzy off-screen couple. ~*Spoiler alert:*~ Cole Sprouse and Lili Reinhart have done their fair share of smooching on the show as Jughead Jones and Betty, respectively, but it seems like there is a romance blossoming IRL. Rumors have been swirling that the Bughead pairing is together off-screen thanks to their cute Twitter exchanges and the fact they’ve been photographed in coordinating outfits when they’re not filming. If they actually aren’t together, they’re still giving us major #couplegoals vibes.

Some of Brian Keene’s Best Novels

16 Behind-the-Scenes Secrets Of The OG Sabrina, The Teenage Witch

17 TV Shows From The ‘90s That Were Surprisingly Super Feminist

Top 16 Mind-Blowing Movies Will Keep You Up At Night