How much is Adele worth?

Adele is an English singer, and songwriter. She first began her music career in 2006 just after she graduated from the BRIT School. Since then, she has released three successful studio albums and with more than 120 million copies sold worldwide, she became one of the best-selling artists in the world.

The talented singer’s breakthrough came in the early 2010s with the arrival of her sophomore album titled “21”. Throughout her career, she has won multiple awards including eighteen Billboard Music Awards, fifteen Grammys, nine BRIT Awards, one Academy Award, and one Golden Globe Award to name a few.

Adele has a net worth of $200 million dollars, as of 2021. Which makes her one of the richest singers in the world.

How Did Adele Get So Rich?

Immediately after the release of her debut studio album, Adele became rich and popular. The soul album was released in early 2008 and it included her very first song – “Hometown Glory”. Apart from entering and topping international charts, it earned her first nomination for an award – Mercury Prize for “Album of the Year”. To further promote her album, she embarked on her debut concert tour titled “An Evening with Adele”. At that time, she also became the first artist to win the BRIT’s Rising Star Award (known then as the Critic’s Choice Award).

The following year, at the 51st edition of the Grammys, Adele won her first Grammy Awards for “Best New Artist” and for “Best Female Pop (Vocal) Performance” (for her debut single). In 2010, she released one of her most symbolic hits – “Rolling in the Deep”. After its release in late November, the song became a global hit. It topped charts in 11 different countries and received multiple awards and nominations such as GAFFA Award, two Billboard Music Awards, and three Grammy Awards. The song also earned Adele her first of eleven records in the “Guinness World Record”.

Adele is famous because of her distinguished musical style and work. She was born in Tottenham, London on May 5, 1988. At the age of four, she began singing and after she graduated from the BRIT School (where she was classmates with Jessie J and Leona Lewis), Adele nurtured her talent and decided to pursue a music career instead of A&R, which at the time she was more interested in.

The talented singer’s career kicked off in early 2006. Just shortly after her graduation, she published her own two songs on the “PlatformsMagazine.com” website. After writing a song for a class project, her friend uploaded it on the then-popular social networking platform MySpace, which impressed Richard Russell. Russell, who is the CEO of the label “XL Recordings” was intrigued by her talent. After receiving an offer by the record label, Adele signed with XL and began work on her first album.

After making history in the late 2000s, Adele became even more successful in 2011 with the release of her sophomore album “21”. The album was released in late-January and it includes some of the singer’s best singles – “Someone like You”, “Set Fire to the Rain”, and “Rumour Has It”. By the end of the year, after selling more than 3.5 million copies, the album became the biggest-selling album of the century. She also became the first artist in Nielsen SoundScan’s history to have a number one album, single and music video.

After a short hiatus due to throat microsurgery, Adele returned at the 2012 Grammys where she once again made history. By winning all six of her categories in which she was nominated, she became the second female artist in history to achieve this. In November 2015, Adele released her latest album “25”. The album includes another record-breaking single “Hello” and it also won multiple awards. Besides landing at number one in 31 weekly charts in 30 different countries, the project also received a number of platinum and diamond certifications in 21 countries.

Ever since 2006, with millions of followers, Adele has established herself as one of the most beloved artists ever. Named multiple times “Artist of the Year” by Billboard magazine, this best-selling artist also holds eleven records in the Guinness World Records book. Most recently, she made history with her latest tour (“Adele Live 2016”), which broke audience records in many countries such as Australia, the United Kingdom, and the United States. 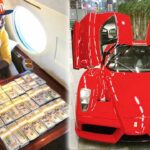